Firstly, as Amanda’s stroke recovery enters year 3, she continues to progress. Once again I’m reminded that her brain basically ‘reset’, or re-booted and each new  milestone occurs and is noted in much the same way as we would probably have noted similar events as our children grew, if social media and smart phones has been around 20 years ago. I make a note of each small step on the journey back to her previous self.

When our daughter came to stay over the Christmas holiday, she offered to paint her mum’s toenails, something Amanda would currently struggle to do, but a thing she would regularly do pre-stroke.

All the various colours remain neatly lined up in her bathroom as both a reminder and an incentive to be able to once again paint them herself. It was amazing to see how such a small thing made her feel like her ‘old self’ again. Thanks in part to our current warm summer weather; she has barely worn shoes since.

She was also proud of the fact that, with a little assistance, she also beat her support worker at Scrabble, and by a respectable margin.

Both these otherwise small events, in conjunction with her daily Voluntastrols capsules before bed support lifting her self-esteem, energising the spirit and engendering a positive overall mood which in turn makes for a willingness to try new things even more.

Amanda surprised herself recently when I once again encouraged her to use her right hand more. As mentioned in a previous post, she now has both significant movement and sensation in the right arm and hand, but her brain simply fails to acknowledge its existence for most of the time.

I tested her grip strength. It’s almost as strong as her (now dominant) left hand. As I got her to squeeze her left hand with her right, I pointed out there was now no excuse for being physically able to lift and carry objects. It just needs constant repetition for the brain to finally remember it should be able to simultaneously control both hands, not just one.

Amanda was recently asked if her sense of smell had altered since her stroke, or if certain smells were particularly evocative? She didn’t think so.

But then, as I was tidying, I found the bag she had brought home from work on the day of her stroke 2 years ago. In it was a small can of ‘Impulse’ body spray. I showed it to her and gave it a spray.

“Oh wow!” The effect of the scent was instant and powerful and she just smiled.

So… the ice cream story.

We were watching a gardening program on TV and Amanda remembered  years ago we attended the Stoke Garden Festival in the UK. She remembered it, not for the flowers or the amazing displays, but for the fact they sold large waffle cone ice creams, covered in fresh cream. The memory was vivid.

She cannot recollect an item on the TV news 30 seconds after it has been broadcast. But when I checked, the Stoke Garden Festival was held in 1986. The ice cream must have been significant.

I found the photographic evidence… 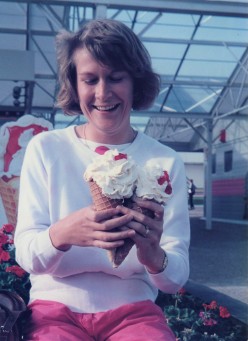