One evening last week, I deliberately left Amanda the kitchen after dinner so she could attempt the washing up on her own.

I came back a few minutes later to find her busily scrubbing the dishes. She looked up, confused.

“How do I make the bubbles in the water?” I looked in the sink to see just hot water.

“The washing… Ah! washing up liquid!”

The gap needed to make those connections is so small sometimes.

On Saturday we went to a social event with some of Amanda’s work colleagues. Her job was to take dessert.

I came home from work on Thursday to find her with a handwritten cheesecake recipe on a scrap of paper. It was the recipe she wanted to use and so she had found it hidden amongst  her shelf of more than 80 cookbooks and assorted folders. She had remembered it, knew where to look and successfully recognised it and dug it out.

I helped her make it ready for Saturday. 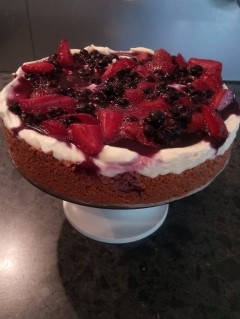 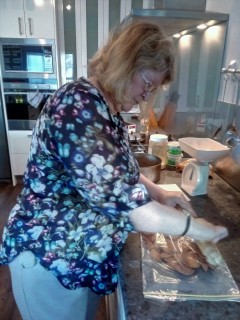 So as it gets nearer to the anniversary of Amanda’s stroke, Christmas also fast approaches; something she has no recollection of from last year.

But Christmas is about tradition, and every year Amanda always decorates the tree, and since this will be the 34th year she has done it, I figured there would at least be a memory of how to do it!

One of her awesome support workers agreed to help her and so I went into the garage to try and find where she had hidden the boxes nearly a year previously. If found them all – but not the lights.

“Any ideas?” I asked hopefully. “I can’t even remember last Christmas.” She replied. I eventually found them and added them to the three large boxes waiting for Becky to arrive and assist the next morning.

Becky was here from 9 – 10am. I checked the webcam at 11am just in time to see Amanda get up from her tea break and move out of shot to the front of the room. Later, when I came home, as I suspected, she confirmed she had carried on with decorating the tree after Becky had gone.

The room looks exactly as it does every year. She remembered. 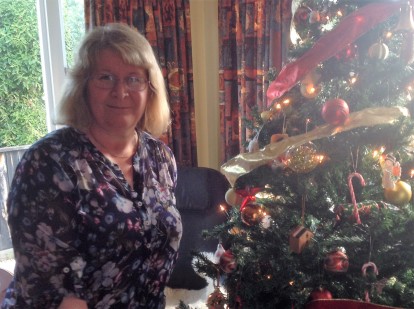 One thought on “Bubbles, cheesecake & baubles”